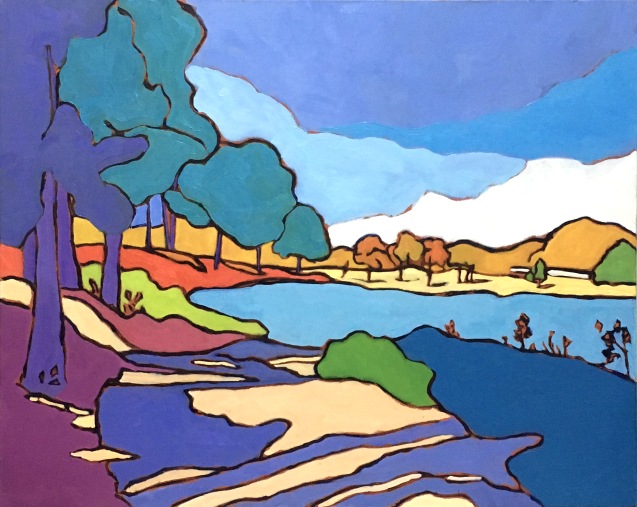 I just had to step back into summer this winter, if not physically, I could do that via my painting!

This colorful summer inspired landscape emerged from a reference photograph I took at a local marina last summer.  I was enamored with the curves and architecture of the landscape which had a sense of invitation.  There were strong shadows and strategic bright lights making the composition all the more interesting.

In approaching the work I simplified and experimented.  Initially leaning toward more “realistic” versions of the colors I saw.  In re-evaluating the progression of the painting I felt that it was missing an expression of brilliancy so evident while I was there.  Keeping some point of reference to the natural hues, I began exaggerating their intensity and formulating groups of color.  The sky evolved later in the process.  Initially surfacing as one large block of color. There were subtle separations but it still read as an overwhelming mass.  Eventually I differentiated the area using a more monochromatic palette of colors which I think worked.

The painting contains a lot of flat color and space.  I think I like the sense of directness in that.  Texture does exist if the viewer gets closer to the painting.  This is where a variety of visible brushwork and thicker layers of paint can be experienced.  It’s like entering into a physical landscape getting to appreciate the energy and activity that is really there.

3 thoughts on ““A Vibrant Summer Lake””